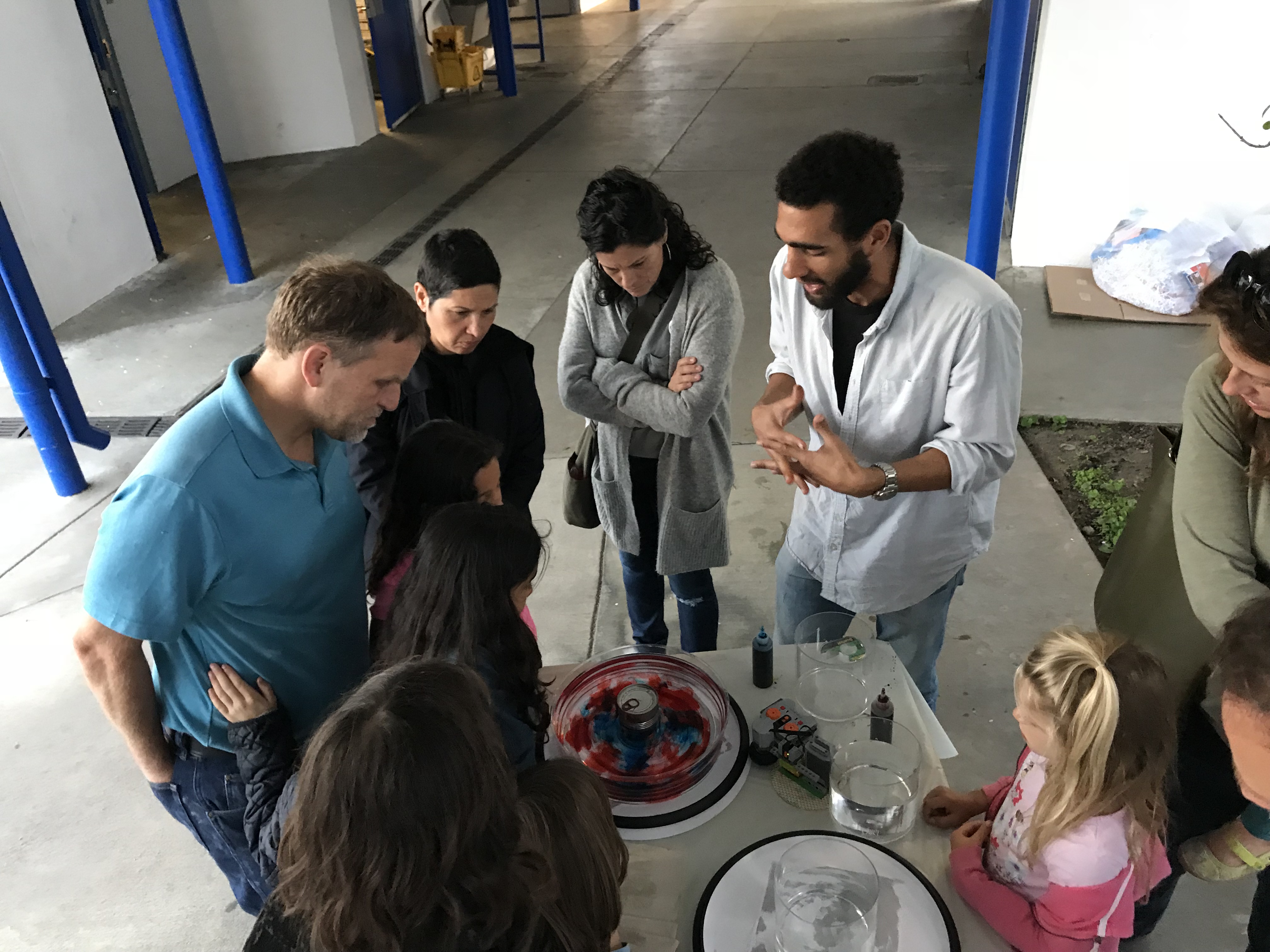 Sean leads a demonstration of “baroclinic instability” (a.k.a. the combination of a strong temperature contrast and rotation that generates storms on Earth) to El Marino students and parents. They’re so focused! We’re now using a LEGO Power Functions remote control to reduce the rotation rate for this demonstration, which makes these eddies larger and therefore more engaging. Even with the bigger eddies, we were also able to shrink the tank compared to previous attempts, which allows for a little more breathing room.

On April 27, 2018, Ashna, Sean, and Spencer of the DIYnamics team performed hands-on demonstrations for dozens of kids at the 23rd annual science fair of the El Marino Language School, a foreign language-focused elementary school in the Culver City Unified School District, in Culver City, CA. In a cool twist on the traditional elementary school-level science fair, El Marino’s fair featured science posters and demonstrations both from their own students and from multiple science groups at UCLA. So the students got to show off their awesome science and simultaneously learn about the just-as-awesome science conducted at the university level. And they even fed us dinner! Naturally, this was an event that DIYnamics wasn’t going to miss! 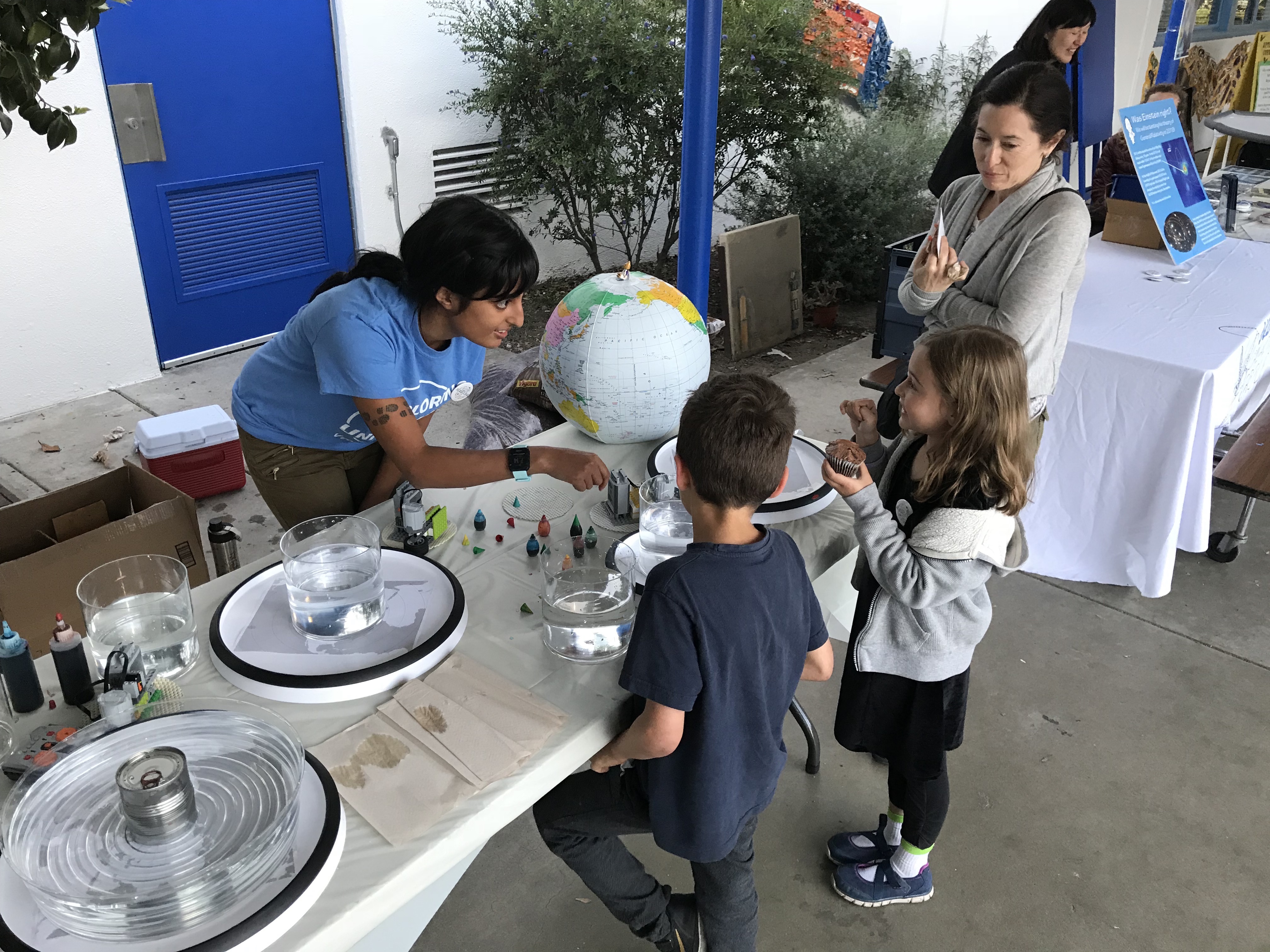 Our newest DIYnamicist, Ashna, with two excited young El Marino students eager to drop dye into our tanks. But before they do so, Ashna makes sure that they make a hypothesis about what they will see in each tank. Then, once the dye has been injected, she asks them to describe what they are seeing, to decide if their hypothesis was right, and then ultimately link the results back to the underlying science we’re trying to teach. This gets participants engaged in active learning throughout the demonstration.

We came equipped with a handful of our DIYnamics rotating table platforms, our handy globe, and some LEGO Batman figurines to teach the students and parents who came by about how Earth’s rotation and temperature contrasts combine to generate the weather patterns that we know and (sometimes) love. 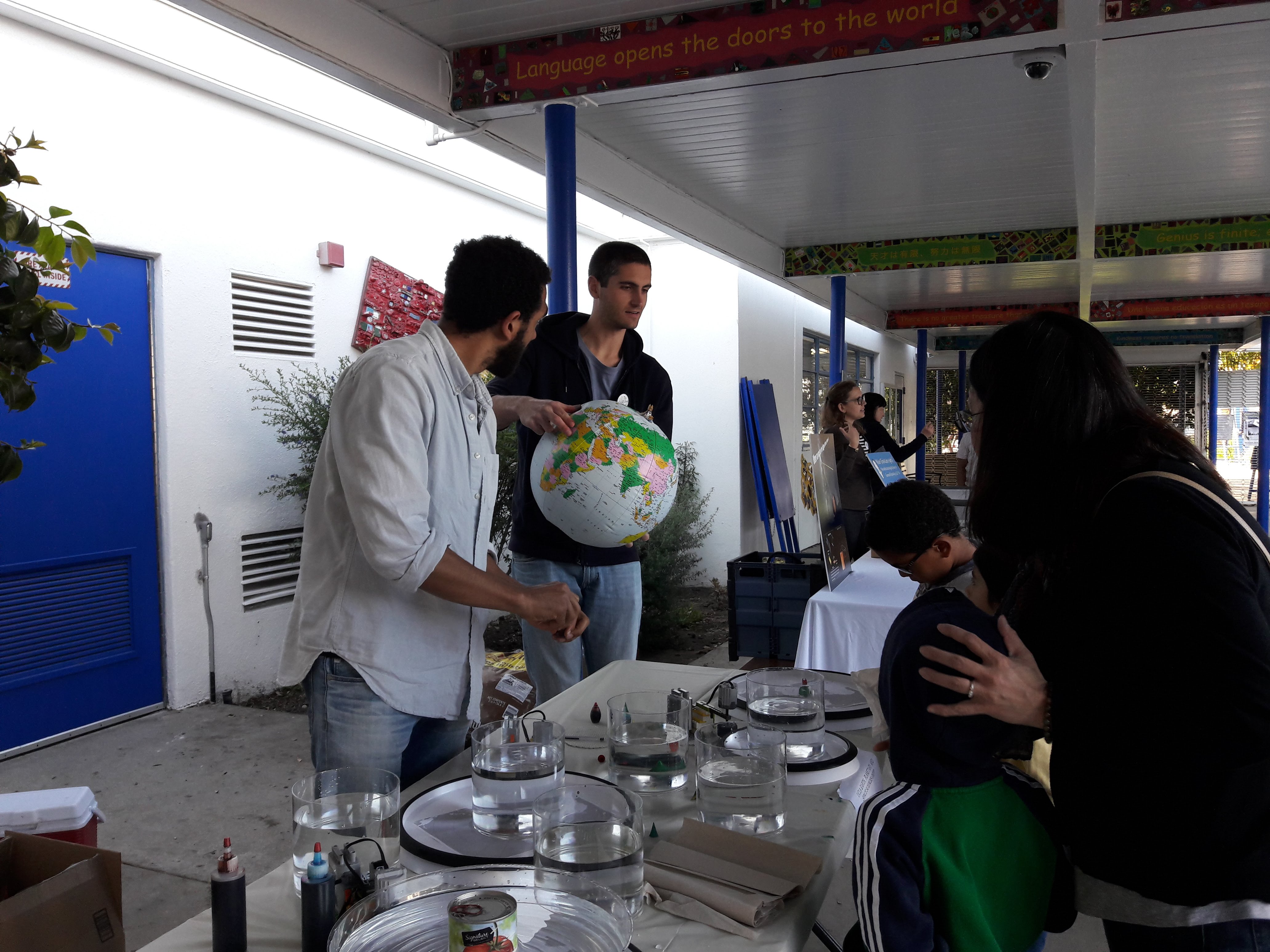 Spencer using an inflatable globe with a LEGO figurine (LEGO Batman, to be specific) taped onto the north pole to make the connection with students between the real world and the tanks on the table. The DIYnamics table farthest back in this image has another LEGO Batman taped at its center, sitting on top of a polar stereographic map (a.k.a. a map centered on the North Pole). Spencer spins the globe showing that Batman spins with it, and at the same time Sean spins the table showing that Batman spins the exact same way there! We’ve found this really helps students make the otherwise difficult connection between tanks of water and the real world.

The parents were a great bunch too! One father told us that he is a pilot, and that our explanation of weather systems using the DIYnamics was the best one he’s ever heard! Pilots really need to know the weather to fy safely, so that’s no small compliment (if we may say so). 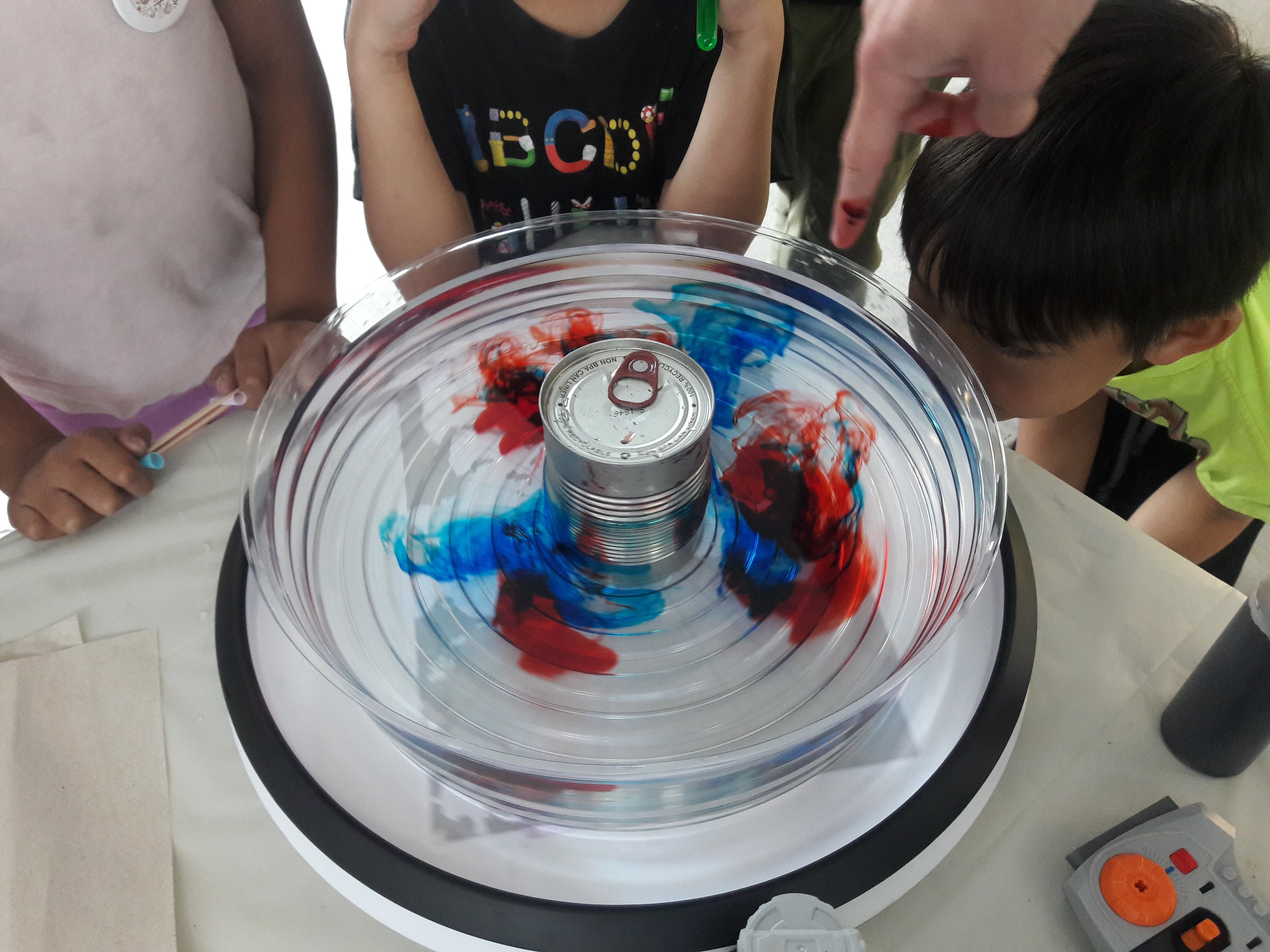 El Marino students eagerly awaiting the onset of “storms” driven by the frozen can of tomato paste in the center of the table. Initially, all of the blue dye was injected next to the can and all of the red dye outside of it. But you can see that the blue dye has moved outward in places, while the red dye has moved in toward the can. (Don’t be alarmed by the red patch on the hand pointing down at the tank…one downside of using red dye is that when it gets on hand it looks like blood! No DIYnamicists (or students or parents) were harmed in the making of this demonstration.)

Special thanks to Erika M. von Euw of UCLA and the El Marino Language School PTA for organizing, the many student and parent volunteers at the event, and most of all the great kids and parents who came to our table. We’re crossing our fingers that we get a repeat invitation for next year’s fair!