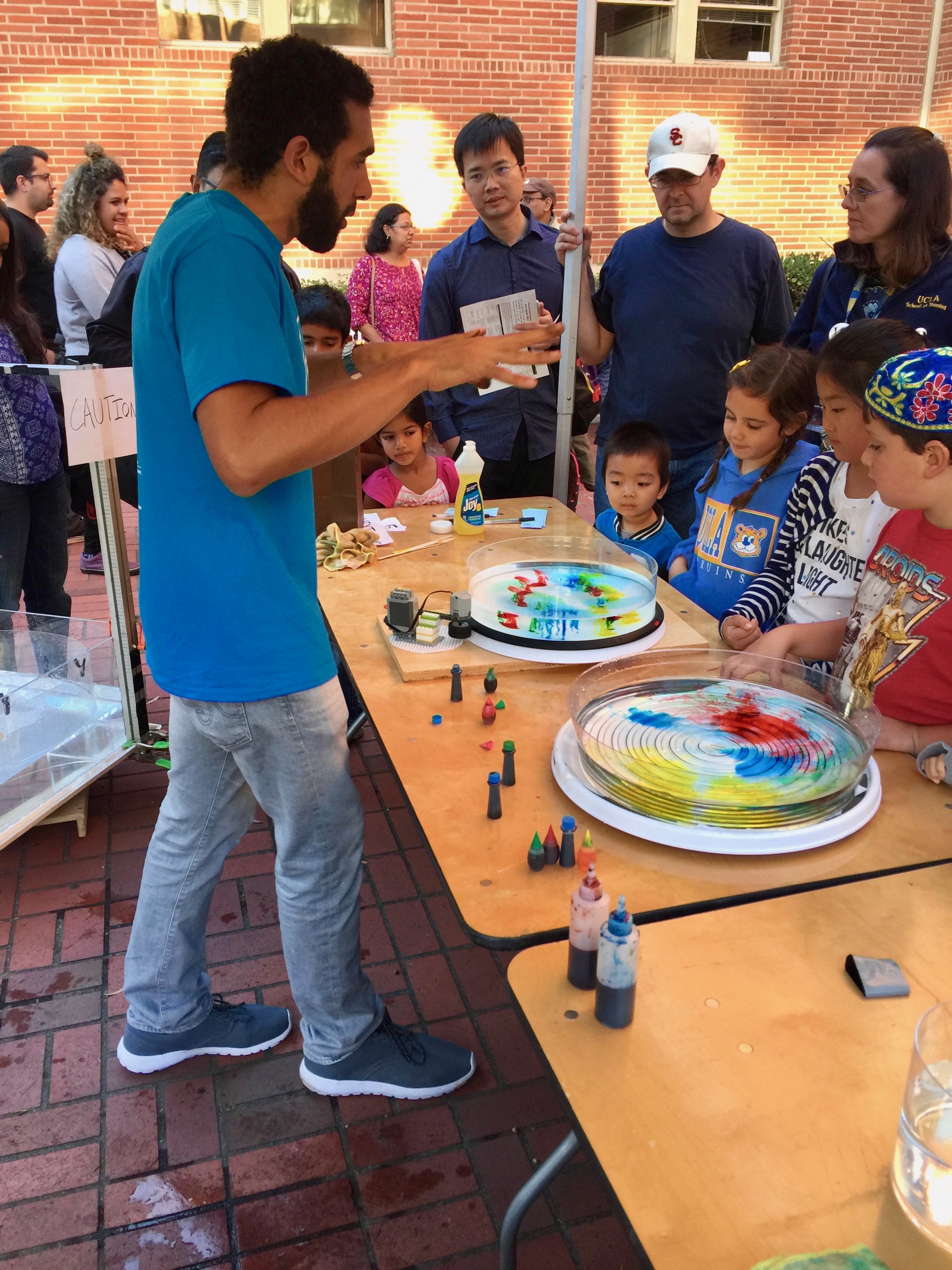 Sean leading a demonstration using DIYnamics tables. The farther table has a special acryllic sidewall that enables us to fill the whole table with water. The nearer one uses a plastic planter tray that costs a few dollars to achieve nearly the same thing.

On November 5, 2017, the DIYnamics team performed hands-on demonstrations for hundreds of kids at the annual Exploring Your Universe (EYU) event at UCLA. EYU is basically a massive science fair, with groups from nearly every science department at UCLA, from astronomers to biochemists, performing demonstrations to teach kids (and their parents!) about their science. Of course, DIYnamics had a booth where we had kids build our tables, use them to learn about rotating fluids, and also give more in-depth demonstrations using our larger, custom square tank. We had a blast showing off our equipment and teaching science to hundreds of people in total over the course of the day. 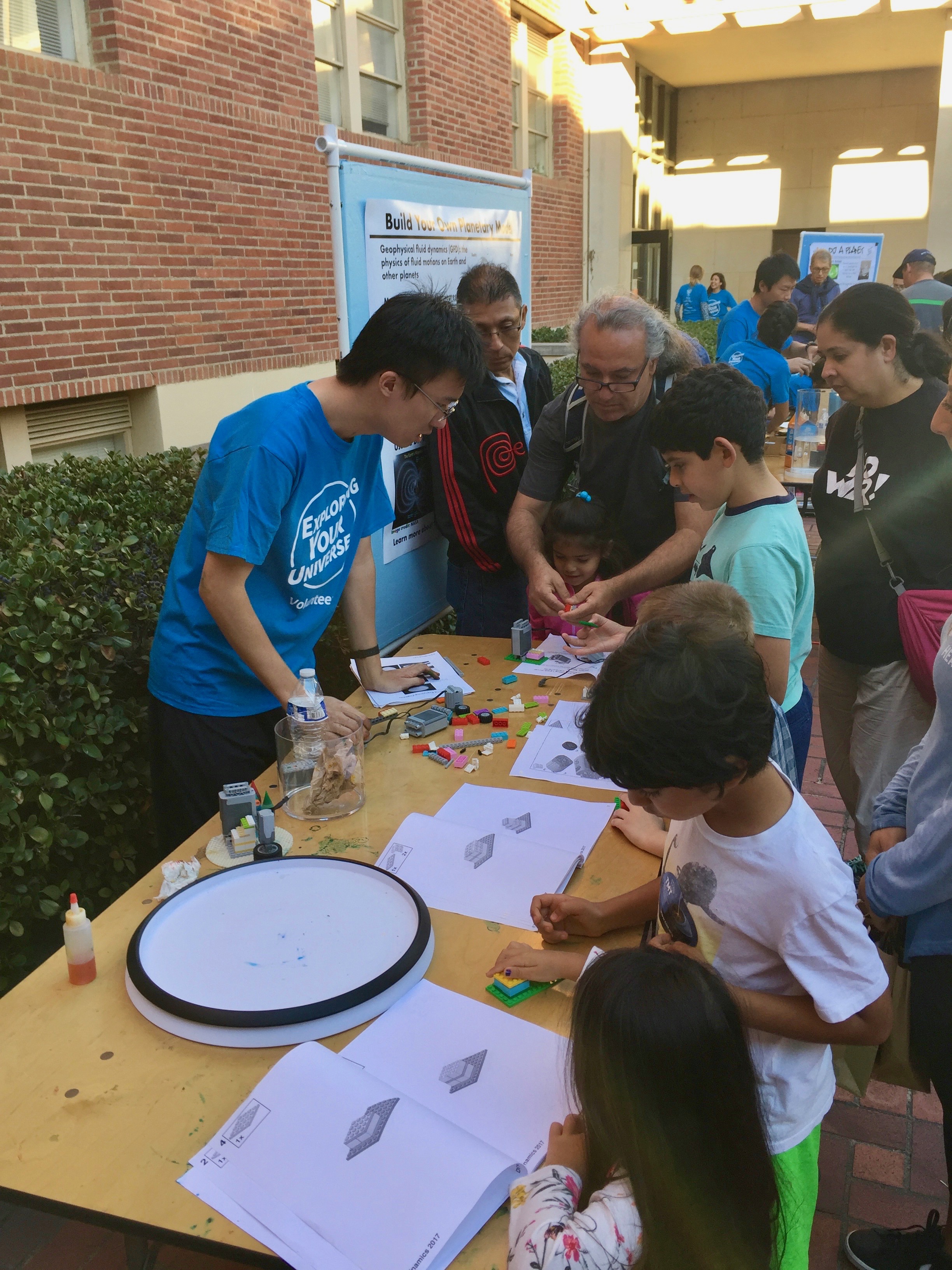 Norris helping out as several kids (and an adult!) build their own motors for the DIYnamics table. His table was swamped all day; kids really loved building these! Who doesn’t love building with LEGOs?

One highlight of the day was our newest activity, wherein kids got to create the DIYnamics rotating tank kit themselves! We provided all of the needed LEGO parts, along with printouts of our official instructions of how to assemble the motor. Dozens of kids went step-by-step through the instructions, creating the finished product in just a few minutes every time. We provided a little guidance here and there, but mostly they were able to do it all on their own!

Whenever somebody finished building their motor, we would then use it to drive a table in a science demonstration. The kids loved to hear us announce their name and to see their creation used to perform a real-world science experiment. Overall, this affirmed our belief that our kit really is easy to build and use, and that the DIY aspect of the apparatus adds to the connection students make with the science — if we can learn about something using LEGOs and food coloring, how hard can it really be? 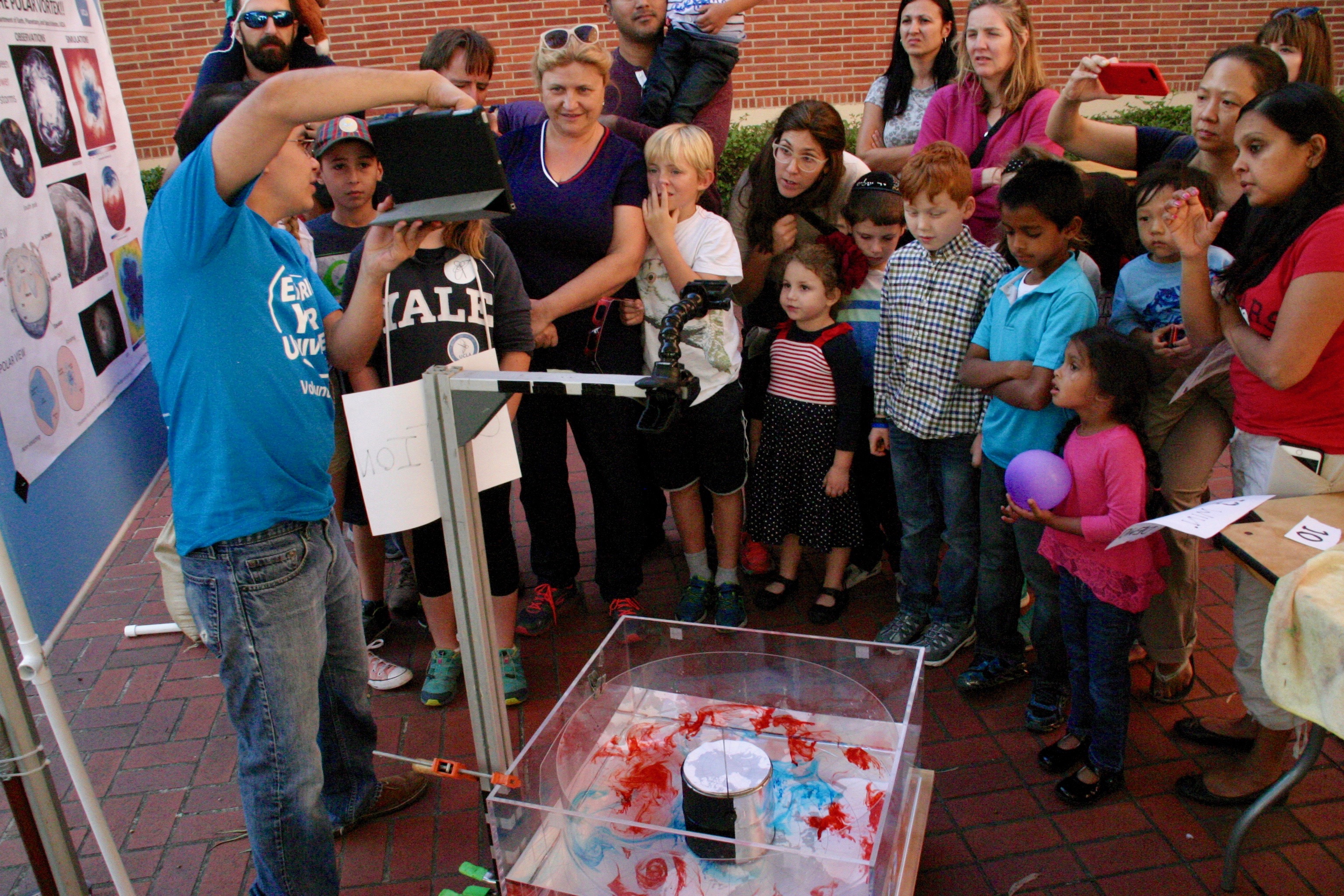 Juan demonstrating baroclinic instability using our large square tank, along with a GoPro in the rotating frame that streams footage to his iPad. Look at all those excited faces!

Another highlight was demonstrating baroclinic instability in our larger square tank. By putting a bucket of ice in the center, we created baroclinic eddies and added some “Hollywood magic” via a GoPro mounted in the rotating frame. The rotating frame footage was streamed directly to an iPad, rather than to an iPhone + projector as we had in the past. As usual, this was a crowd favorite. 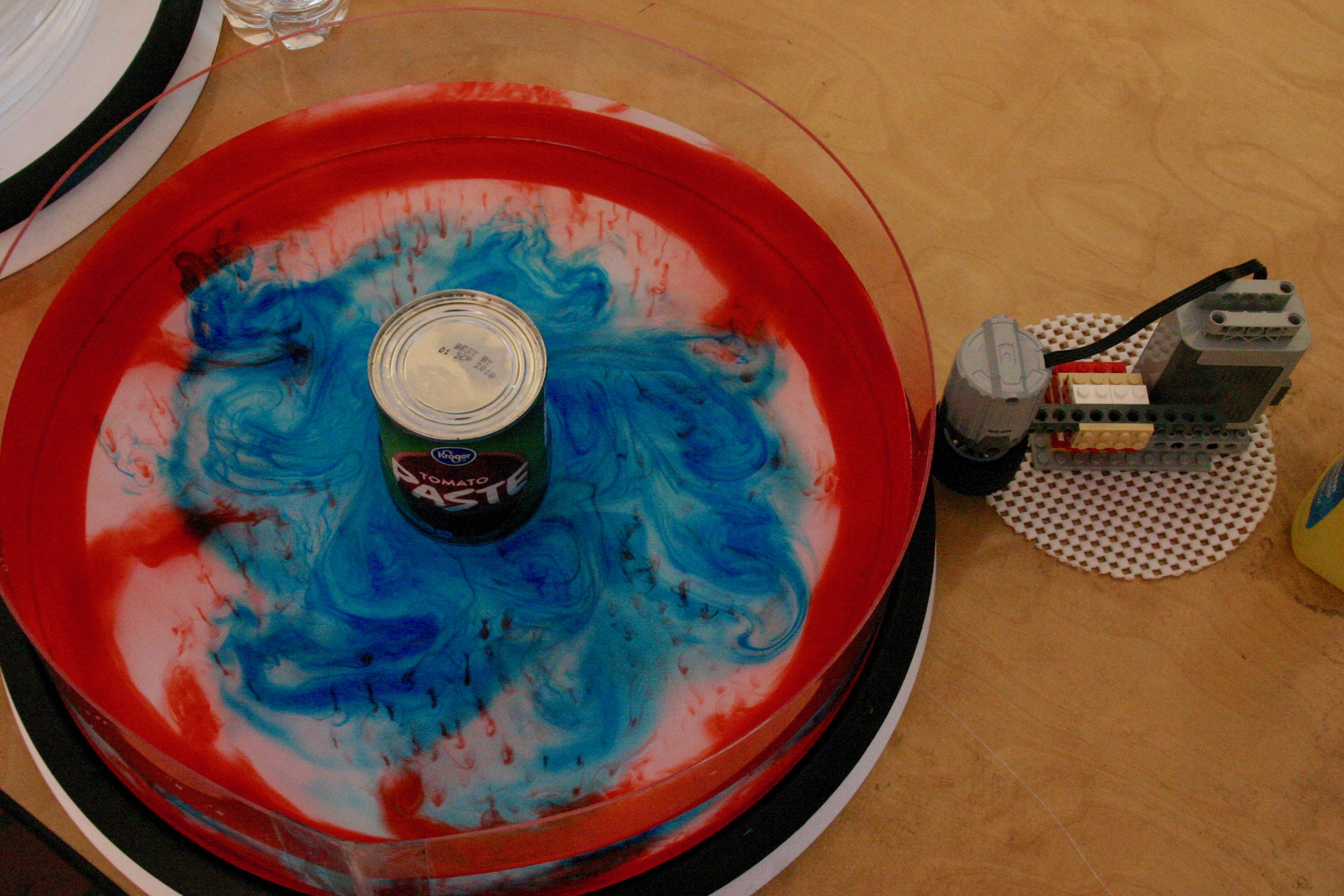 Baroclinic instability generated on the DIYnamics table using a frozen can of tomato paste as the cold source at the center. We were happily shocked when this worked first try, all while we were getting setup for the rest of the event! Huge thanks to Henry Gonzalez for making the acryllic sidewall that enabled the fluid to span the table’s full width.

Finally, in addition to the baroclinic instability demonstration on the big tank, we managed to get it working for the first time on the smaller DIYnamics table! These eddies need a sufficiently large tank in order to grow (specifically, the tank radius must be appreciably larger than the “Rossby radius of deformation”, which determines the size of the eddies), and that extra space was enabled by an acryllic sidewall that Jon installed on one of the tables with the help of Henry Gonzalez of the UCLA Dept. of Earth, Planetary, and Space Sciences. Instead of a paint bucket filled with ice, we used a frozen can of tomato paste, which also allowed for more room for the eddies to grow. We’re really excited to try this one again and ultimately create a lesson plan and videos for it!

Special thanks to returning volunteer Chloe Wicker, first time volunteer Tersi Arias-Young, the EYU organizers, and most of all the great kids and parents who came to our booth. We’re already looking forward to EYU 2018!