Swirling polar flows reach down to lower latitudes in our demonstration made on the 1 meter diameter Whale Table.

Prof. Aurnou took two DIYnamics Lego Tables to Career Day at Roscomare Elementary School on April 12, 2019. After discussing what makes planets and their atmospheres so interesting in the classroom (How about jets & vortices!), the entire class ventured outside and did experiments on how food coloring moves around differently in standing tanks of water compared to rotating ones. We discussed what aspects of the different flow patterns looks more or less like what we see in planetary atmospheres. Lastly, one student dumped A LOT of green food coloring into one tank and pointed out that there wasn’t anything to see anymore. Which is really an important experiment to carry out. 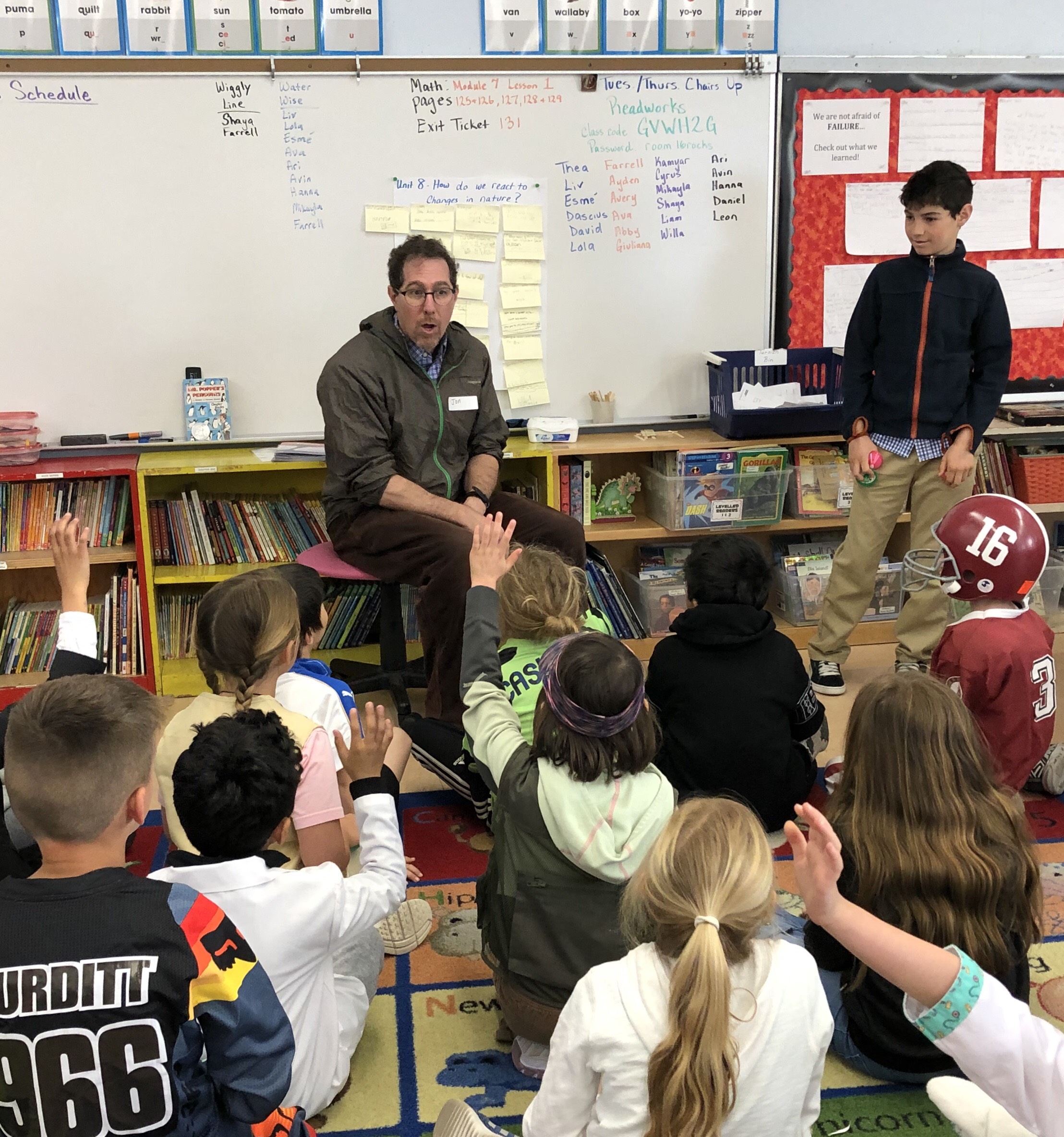 Students at Roscomare ask Jon questions about fluid flows. Although one of them, Ethan (standing), has heard this stuff before…Jon is his dad!

Attack of the Polar Vortex!!! at David Geffen Academy

On April 27, 2019, members of the SpinLab group —— Jewel Abbate, Jon Aurnou, AJ Chlarson, Henry Gonzalez, Emily Hawkins, Taylor Lonner and Yufan Xu —- figured out how to transport one Lego Table (easy) and our new 40” diameter prototype table, code-named Whale2 (not as easy!), over to the Geffen Academy on the southern tip of UCLA’s campus. The next day, Prof. Aurnou lead three 50-minute classes with essential pit crew support from Jewel, Emily, Henry and Yufan. This demo-based presentation, entitled “Attack of the Polar Vortex!!!”, was given to a mix of 6th - 8th graders as part of Geffen Academy’s 2019 UCLA Day. After 5 minutes of slides showing how wintertime polar flows can reach down and visit the mid-latitudes, the class ran a set of experiments on the Lego Table to watch how a patch of dense creamer in a rotating tank of water become unstable, and shreds itself into smaller structures. 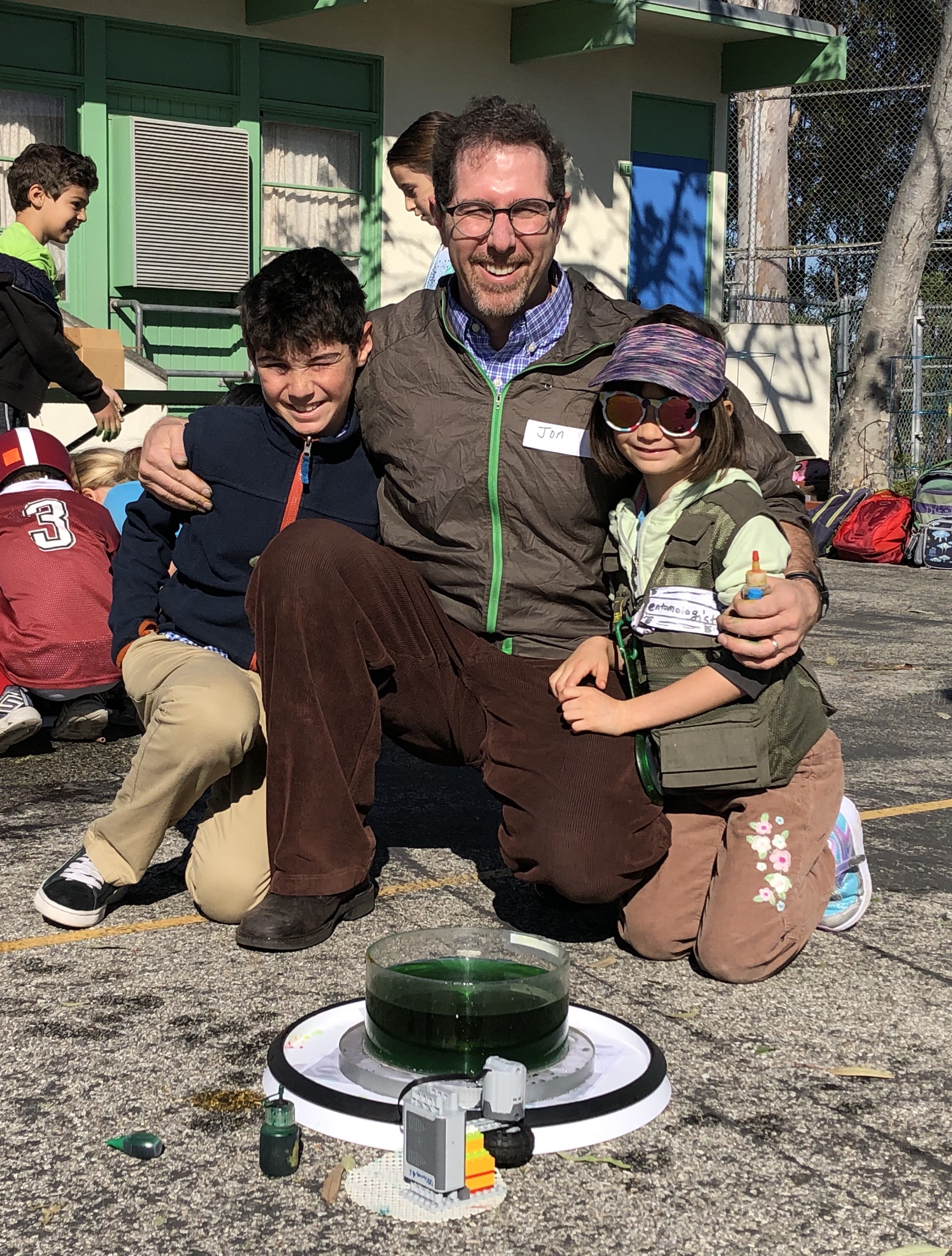 Jon with two happy students. Once again, Ethan Aurnou, this time with his sister Abby. Pretty cool to learn science through fun demonstrations AND have your dad visit you at school!

Then a related experiment was carried out on The Whale2, filled with about 5 cm of water and rotating at about 8 revolutions per minute. Here a frozen ice-filled paint can was placed at the center of the tank to generate cold, dense polar “air masses” which we demarcated with blue food coloring. We marked the warmer water near the outside of the tank with red food coloring, and then sat back and watched our simulated polar vortex become unstable and “attack” Chicago and the like. The students asked many excellent questions and made a number of observations. For instance, it was noted that the processes on the smaller Lego Table appeared to mimic those on the much larger Whale, and that this suggested that the processes we see in our demonstrations might then scale up to larger systems like the atmosphere. Yes (!), that is exactly the idea.