DIYnamics at Exploring Your Universe 2020

On November 1st, 2020, the UCLA Division of Physical Sciences presented its 12th annual Exploring Your Universe (EYU) public outreach event. Every year, EYU features dozens of booths for attendees to learn about a diverse range of topics. Amidst the ongoing COVID-19 pandemic, this year’s public outreach event was held entirely virtually on hopin.to. The DIYnamics Team adapted and utilized the opportunity to share the following experiments for learning at home!

Why is Antarctica Melting?

Jordyn created a video, How do glaciers melt?, providing an overview of the fluid dynamics behind the titular process. She described the experimental setup in detail and analyzed experimental results for background into the range of structures observed. Watch to see the interface between density layers and baroclinic eddies!

Jordyn Moscoso and Ken Zhao presented a talk on how do glaciers melt. Glaciers are massive bodies of frozen fresh water. In locales such as Antarctica, sheets of ice are surrounded by ocean or warm (in a relative sense — absolute temperatures can dip to 34°F/1°C!) salty water. The temperature difference causes glaciers to melt from the bottom releasing cold fresh water. This loss of mass renders ice sheets unstable and susceptible to calfing or large chunks falling off. Meanwhile, the cold fresh meltwater is less dense than the warm salty ocean water due to differences in salinity. Convection occurs as the cold fresh water rises above the warm salty water and the ocean equilibriates into layers by density.

Antarctica is a continent the size of the United States and Mexico combined. The fluid dynamics of this vast system can be modeled with a rotating tank platform capturing its key characteristics. Jordyn and Ken performed an experiment featuring a tank of warm salty water (the “ocean”) with a cylindrical block of ice (the “glacier”) at its center. The tank is spun to account for the fundamental impacts of Earth’s rotation. In the experiment, we can observe the model’s glacier melting from its bottom and ocean stratifying per density differences. Food coloring is added to help visualize fluid motions — the interface between layers is distinct! Eddies or swirling structures form as the system’s rotation interacts with the fluid body’s density differences. 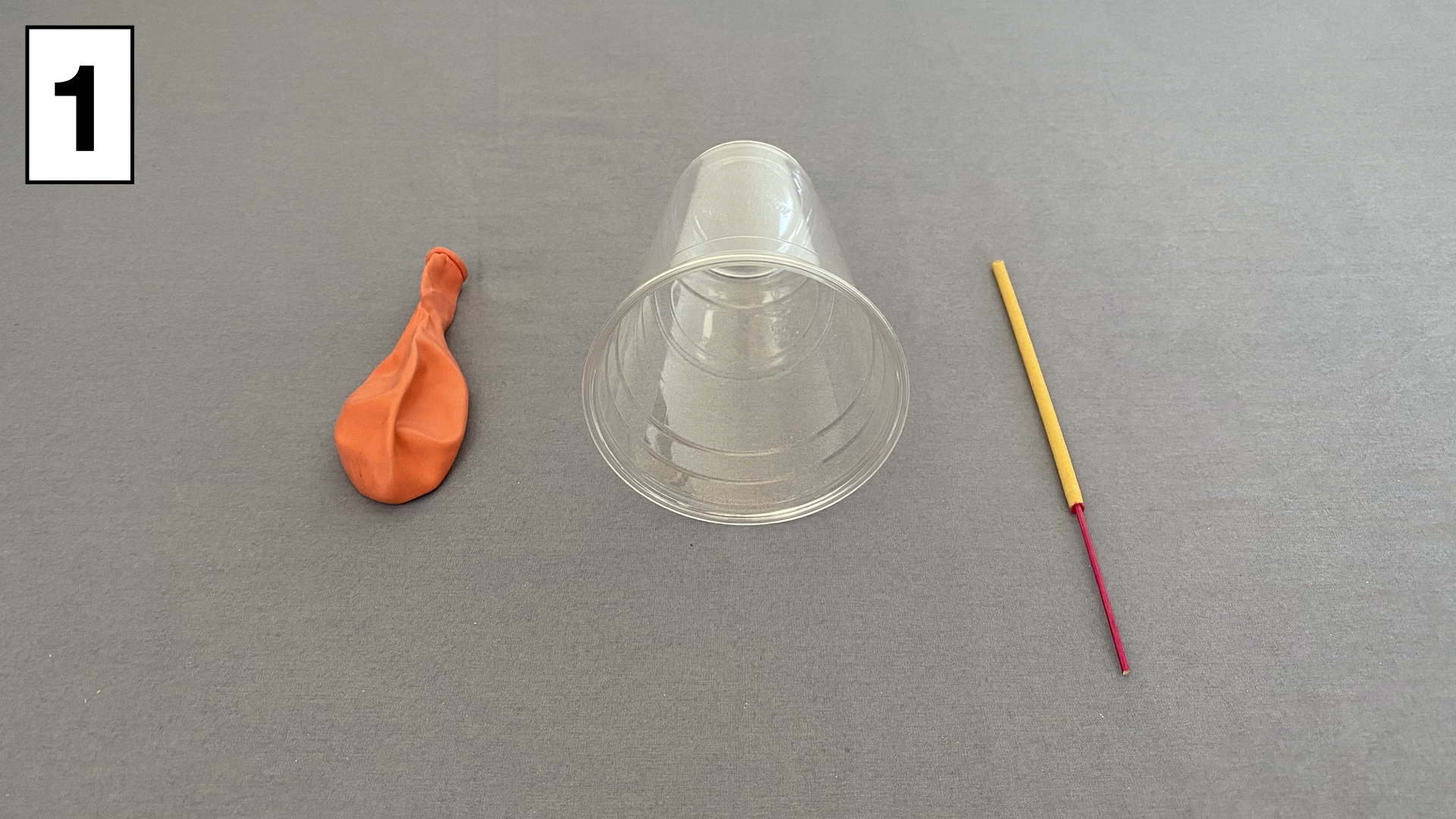 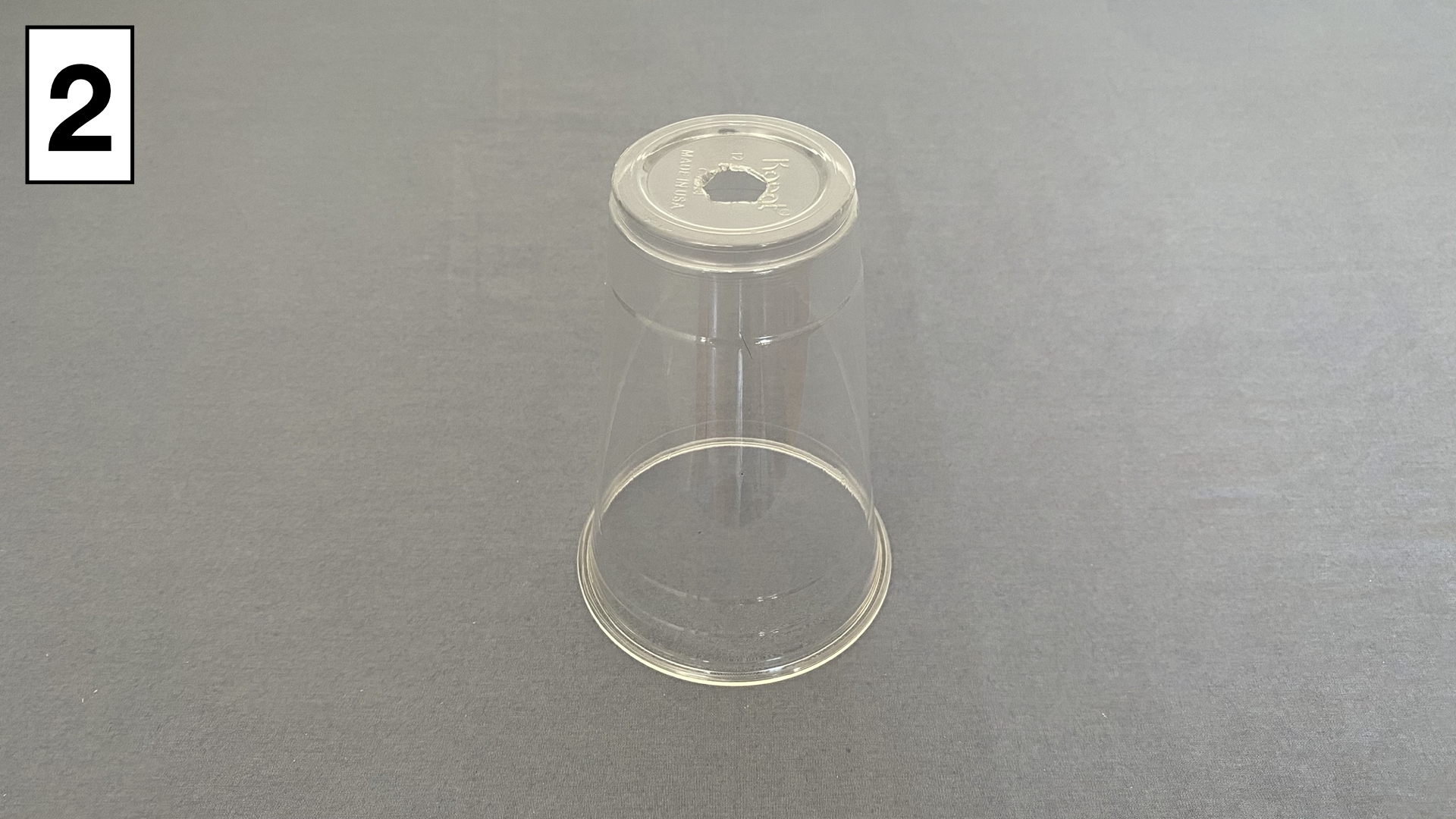 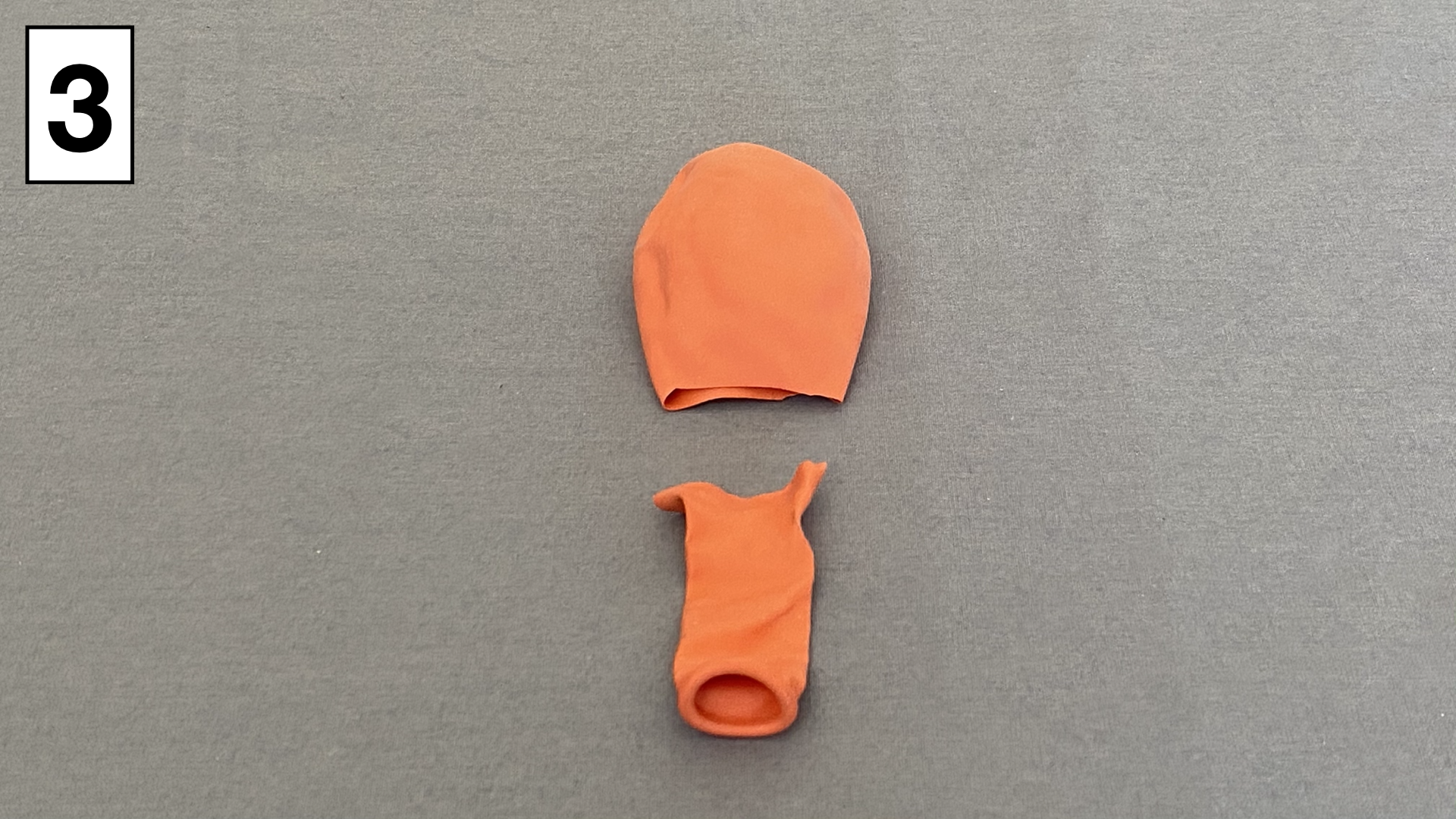 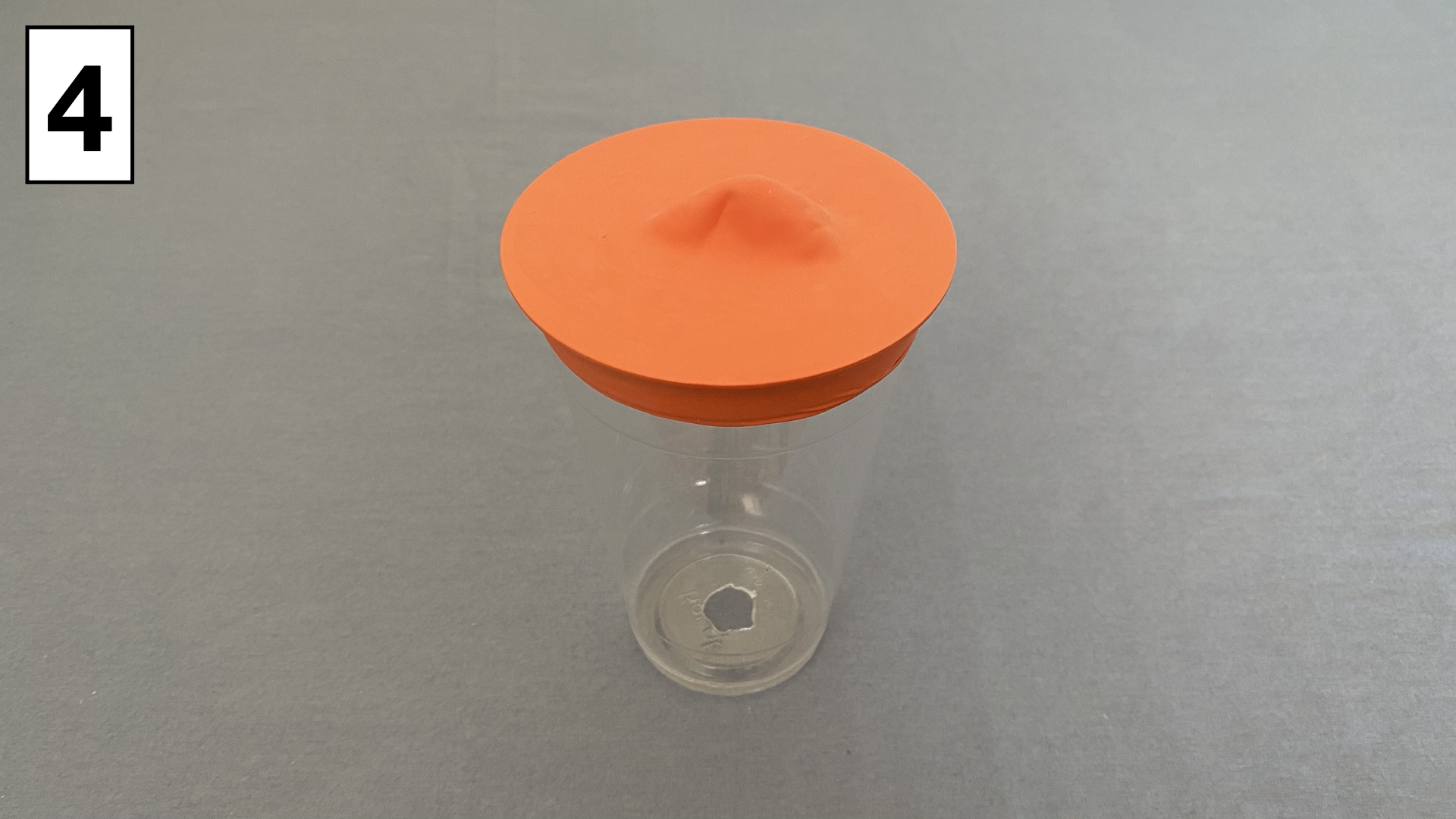 Yufan Xu and Akash Gupta guided the virtual audience through easy to perform home experiments providing a glimpse into the fluid dynamics all around us! A vortex ring is a torus or donut shaped structure that forms when a jet of fast moving fluid collides with stationary fluid. As the jet pushes through, its edges are slowed by friction and wrap around themselves leading to the formation of a circular ring of circulating fluid. Yufan and Akash demonstrated how to build your own air vortex cannon before firing vortex rings of smoke!

Convection refers to the transfer of heat by motion within a fluid. The transfer of heat occurs wherever fluid bodies feature a temperature gradient — from a cooling cup of coffee to a sun generating energy by fusion. Convection can be visualized with particles suspended in fluid — an ideal solution is Barbasoloscope with a recipe by Yufan here. Yufan and Akash highlighted convection by warming up miso soup on a stovetop — the fermented soybean mixture tracked cells of fluid motion as the solution circulated between the pot’s fire heated bottom and air cooled top. 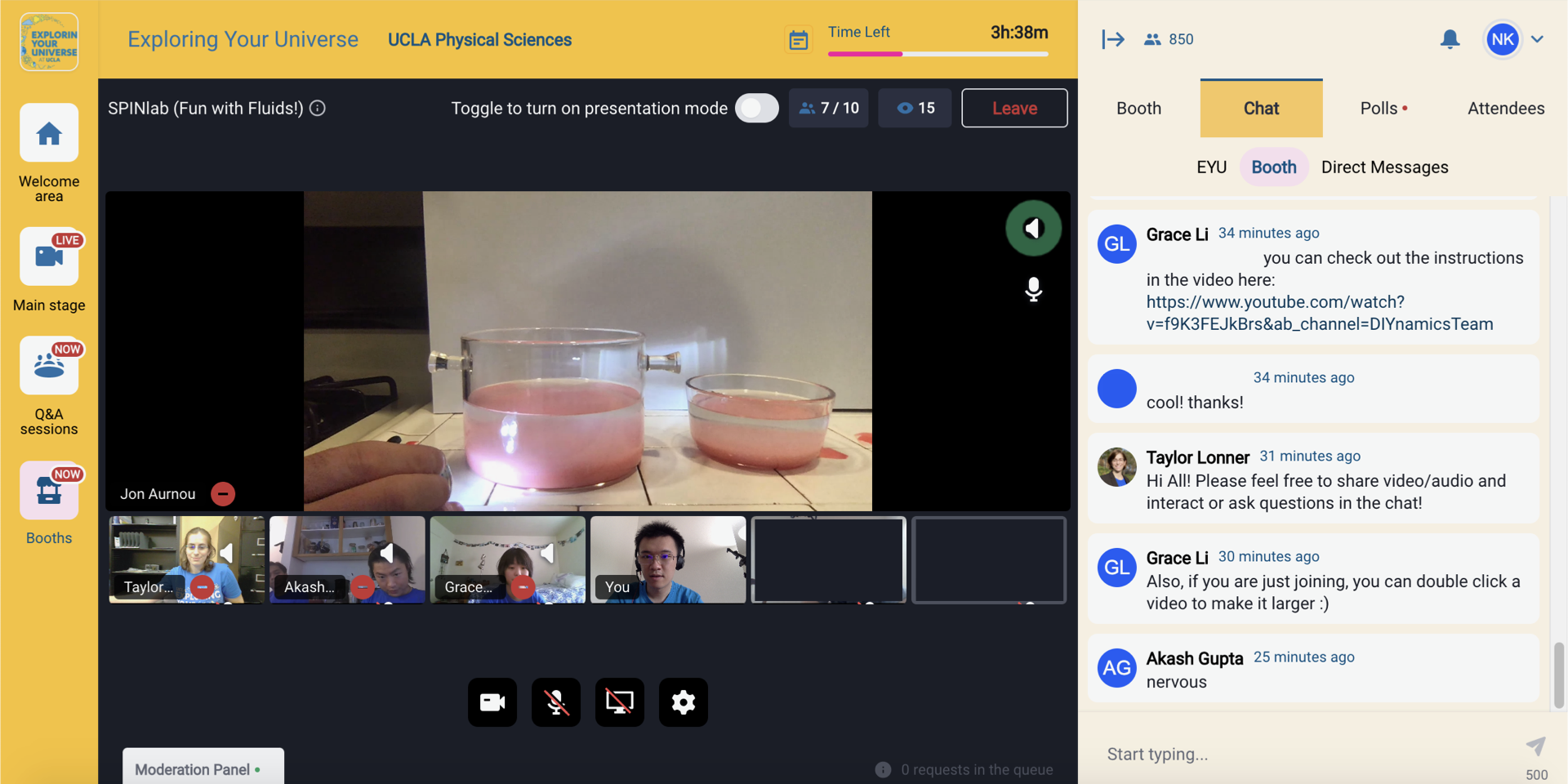 Jon added creamer (dyed pink) to water to demonstrate how waves in different layers oscillate back and forth through the fluid body!

Jon Aurnou described how pendulums behave both individually and together. Pendulums refer to masses suspended by an arm from a pivot — the masses swing back and forth about the pivot. Jon created a homemade pendulum by hanging a length of wood from a nail. He demonstrated that if a pendulum is released from a given height, it will swing across its equilibrium point until eventually coming to rest. Per the conservation of energy, with each cycle, the pendulum reaches a height near to but slightly less than its previous iteration. Meanwhile, the period or time required for a pendulum to complete a cycle depends on the length of the arm separating the mass and pivot. Jon compared short and long homemade pendulums to illustrate how given equivalent starting heights, the short pendulums will oscillate much faster. Having established that the behavior of each pendulum is tied to its properties, he tried swinging two different pendulums back and forth about the same pivot. The two pendulums do not behave independently but rather are impacted by each other — the signals amplify when the pendulums travel together and are muted when the pendulums collide.

Jon shared how pendulum-like conditions also exist in fluid bodies! He created a “pendulum” by filling a tank with water — after allowing the water to rest, to induce swinging, he added a mass of dense creamer with food coloring to one side. A wave of creamer oscillates back and forth through the tank! Different layers of the ocean (see Why is Antarctica Melting?!) can oscillate at different frequencies leading to combined signals that have been amplified and muted. Finding the original frequency of a “pendulum” is an important yet challenging task — a puzzle to solve!

Dancing Milk and the Importance of Surface Tension 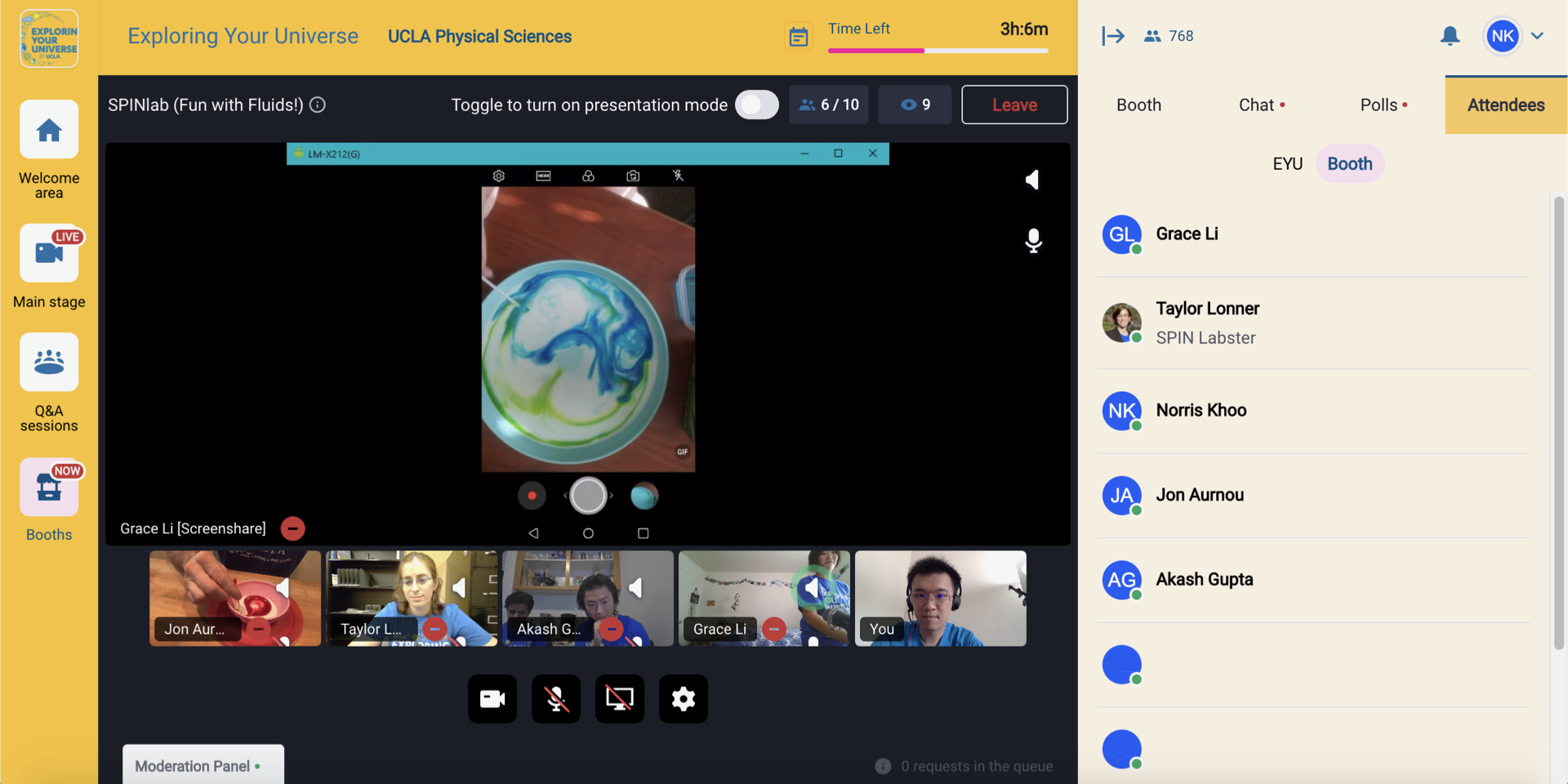 Grace Li performed a series of experiments (helping the virtual audience follow along at home!) demonstrating surface tension in action. Surface tension is a property of liquids referring to its surface’s integrity against dissipation and attributed to forces of attraction between its molecules. Grace illustrated how different liquids have different degrees of surface tension by using a Q-tip to drag liquid droplets across wax paper. Water molecules are strongly cohesive whilst isopropyl alcohol molecules are weakly cohesive — thus, only water droplets could be successfully dragged. The strong cohesion of water molecules is essential to the natural world — from water striders walking on water to redwoods bringing water from their roots to branches!

Surface tension is disrupted by surfactants such as soap that reduce the forces of attraction between liquid molecules — surfactants allow a liquid’s molecules to spread apart. To demonstrate, Grace filled a tank with milk and rested droplets of food coloring on its surface. She dipped a soap covered Q-tip into the milk — the surfactant caused the food coloring to dissipate leading to stunning patterns of green and blue! 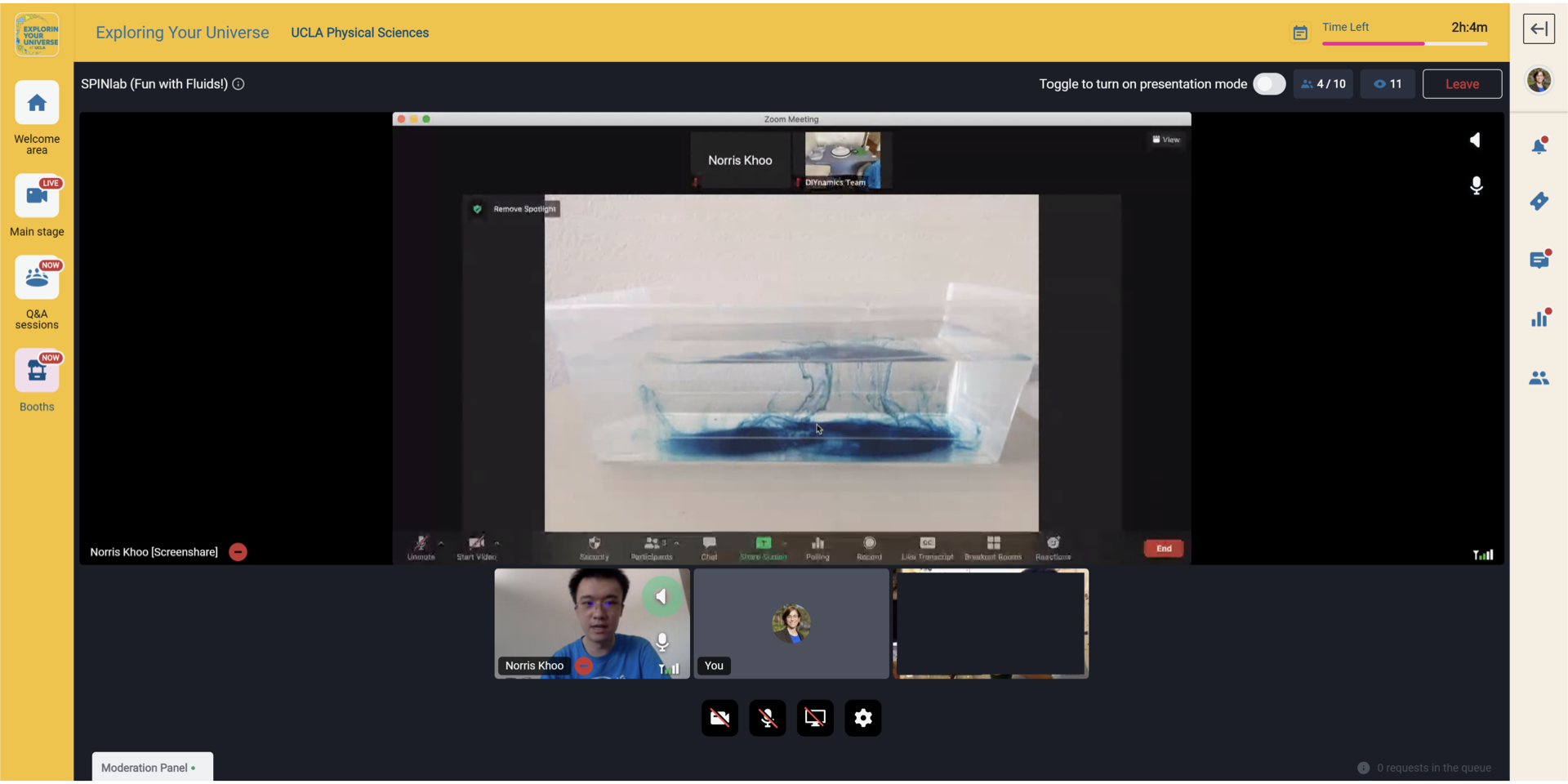 Norris Khoo utilized the Technics Table to highlight the impact of rotation on a fluid body’s behavior. The fluid dynamics of Earth’s atmosphere (air), oceans (water) and interiors (molten iron) are all fundamentally impacted by the planet’s rotation. To help the virtual audience reason with its effects, Norris presented a comparison of fluid motions in non-rotating and rotating systems — food coloring is added to visualize fluid motions. The non-rotating system consists of a tank of water. After allowing the system to rest (no fluid motions within within the tank), we observed that the marked water is free to diffuse with no discernable structure. Meanwhile, the rotating system consists of a rotating tank of water — the Technics Table. After allowing the system to spin up (no fluid motions within the tank as it rotates), we observed that the marked water organizes itself into vertical columns. This occurs because rotation constrains fluid motions to align them with its axis — this counteracts diffusion. The impact of rotation, the Coriolis force, is a parameter influencing our (and other) planet’s weather, ocean currents, magnetic field and more!

Making Your Own Polar Vortex 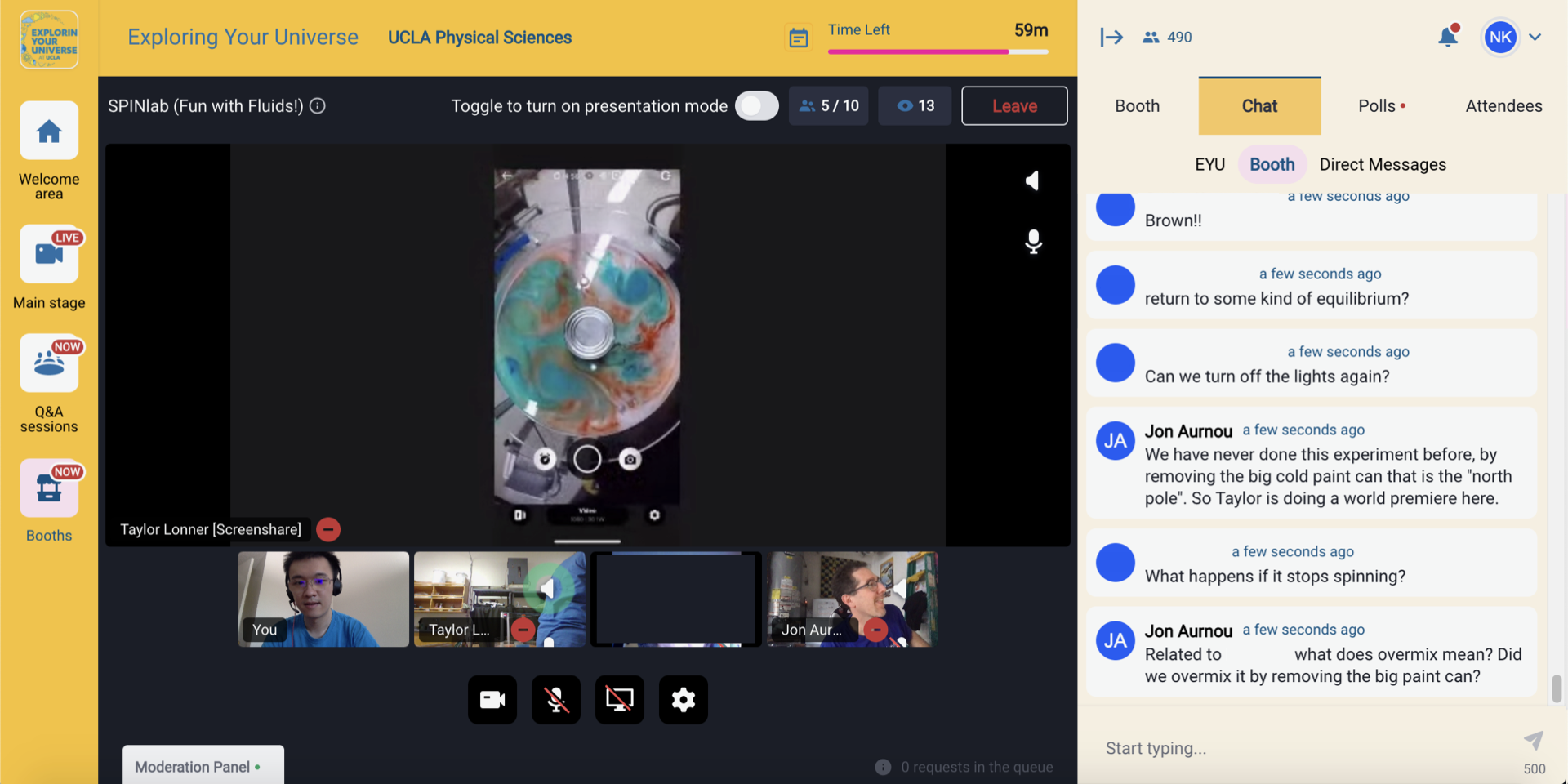 Taylor established a thermal gradient in the rotating system using a frozen can. Due to rotation, the cold water in the center interacts with the warm water to the periphery to create baroclinic eddies. The HT3 Table’s diameter enables the formation of large structures!

Taylor Lonner utilized the HT3 Table to highlight how rotation and turbulence interact in fluid bodies. Turbulence refers to a disruption to the system — conditions include a thermal gradient or mechanical movement. Taylor performed a series of experiments feature different types of turbulence in a rotating system — the HT3 Table. The rotating tank platform’s meter diameter provided ample room for large and complex structures to form. Meanwhile, thanks to Zoom and steps described here, she provided real-time footage for the virtual audience to digest. This kickstarted a rich Q&A as the virtual audience worked with Taylor, Jon and Norris to analyze the stunning display inside the tank.

Taylor established a thermal gradient in the rotating system using methods similar to Why is Antarctica Melting? — she fixed a frozen can in the middle of the rotating tank of water. The center is cold whilst the periphery is warm — as the system rotates, dense cold water is pushed outwards whilst light warm water flows inwards to take its place. This leads to the formation of stunning eddies about the frozen can! On Earth, weather in the mid-lattitudes are defined by similar behavior as cold polar air mixed with warm equatorial air. To induce mechanical movement, Taylor rapidly removed the frozen can from the rotating tank of water. Although this can be interpreted as plucking the “glacier” out of the “ocean”, in general, the removal of the mass creates a vacuum causing water to flow and fill the gap. Constrained by rotation, the turbulence is reorganized into eddies of different shapes and sizes — fluid motions remain aligned with the axis of rotation. The interaction between rotation and turbulence is responsible for massive storm systems as seen on Jupiter!

Our goal for EYU was to demonstrate that you can perform your own experiments at home! Experiments are key to learning because models, whilst abstractions of real world systems, provide intuition into the fundamental forces that govern our universe. The process of setting up, performing and analyzing and experiment is an exciting challenge in problem solving and a first hand account proves invaluable. Most of these demonstrations can be performed using household materials to reduce barriers and expand inclusivity in the sciences. Ultimately, understanding the world around us can help audience members (whether in-person or virtual) make informed decisions in their daily lives — Why is Antarctica melting? highlights the detrimental impact that ocean warming of mere degrees will have on Antarctica. Learn more on our Teaching page and YouTube channel!

Special thanks to the EYU organizers and volunteers, the UCLA Division of Physical Sciences and all of the attendees! It was a blast working together to learn from experiments and ponder interesting questions! Thank you to the following individuals here who supported the How do glaciers melt video. We look forward to next year’s EYU!