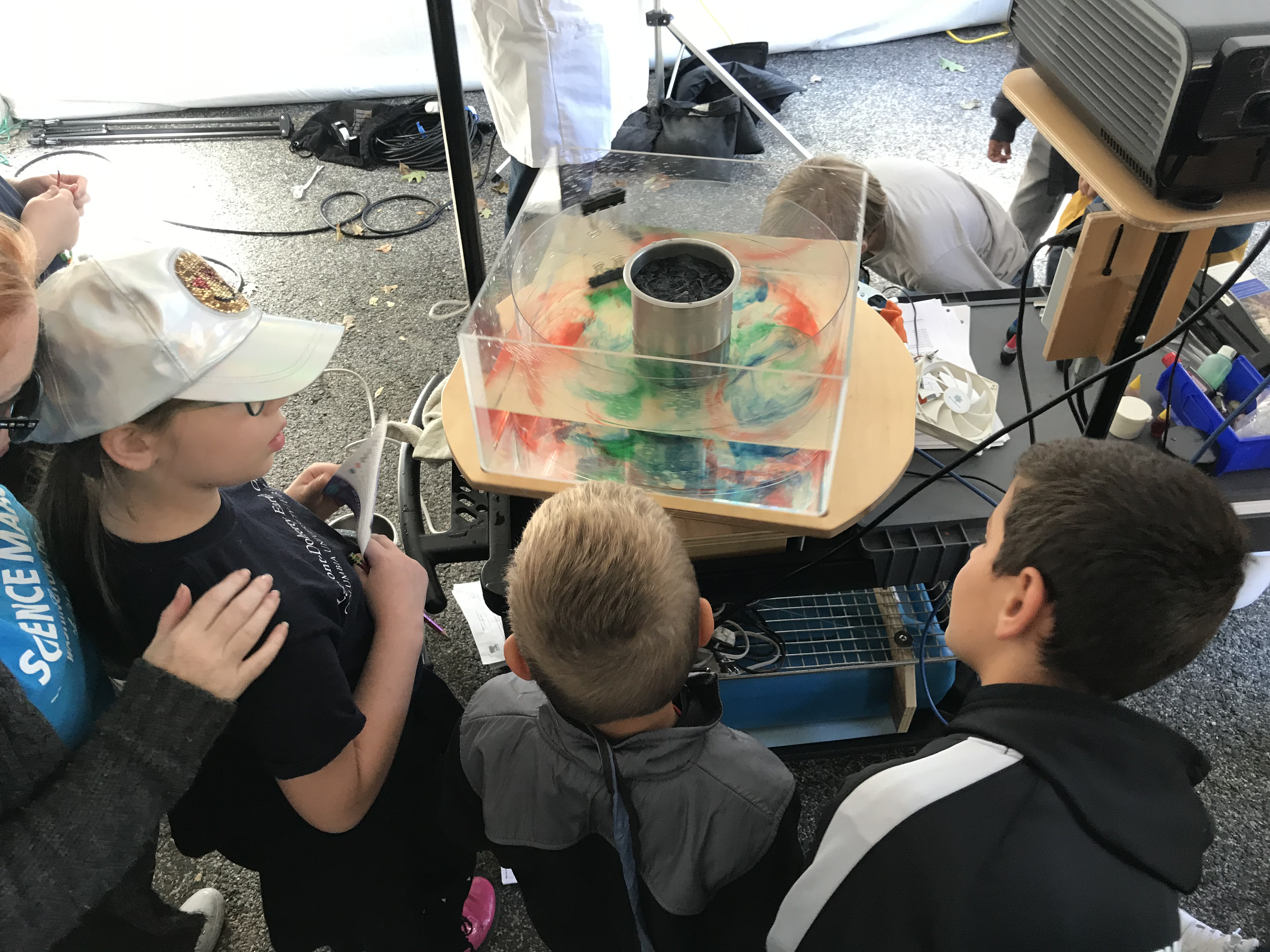 Attendees of the Lamont Open House check out the baroclinic instability demonstration up close. Lamont volunteer Jeff Strong added green dye in addition to the standard red and blue, which adds a nice extra touch of color.

On October 5, 2019, DIYnamics made its debut at the annual Open House event held by the Lamont-Doherty Earth Observatory, or just “Lamont” for short. Lamont is the home of nearly all of the Earth Sciences conducted at Columbia University in New York and is where Spencer currently works as a postdoctoral research scientist. Lamont Open House is a giant public science fair event, featuring hundreds of cool demonstrations of Lamont science including a trash can volcano and, of course, rotating tank demonstrations.

For this event, Spencer introduced to Lamont the DIYnamics LEGO table, which we paired with the Weather in a Tank platform that Lamont already had on hand to create a very nice one-two punch of demonstrations: attendees could learn the very basics of rotating vs. non-rotating fluids from the ultra simple and approachable LEGO tables, and then they could just go a few feet away to the Weather in a Tank setup where Open House volunteer Jeff Strong taught them about the polar vortex and other cool features of Earth’s oceans and atmosphere via more involved demonstrations. 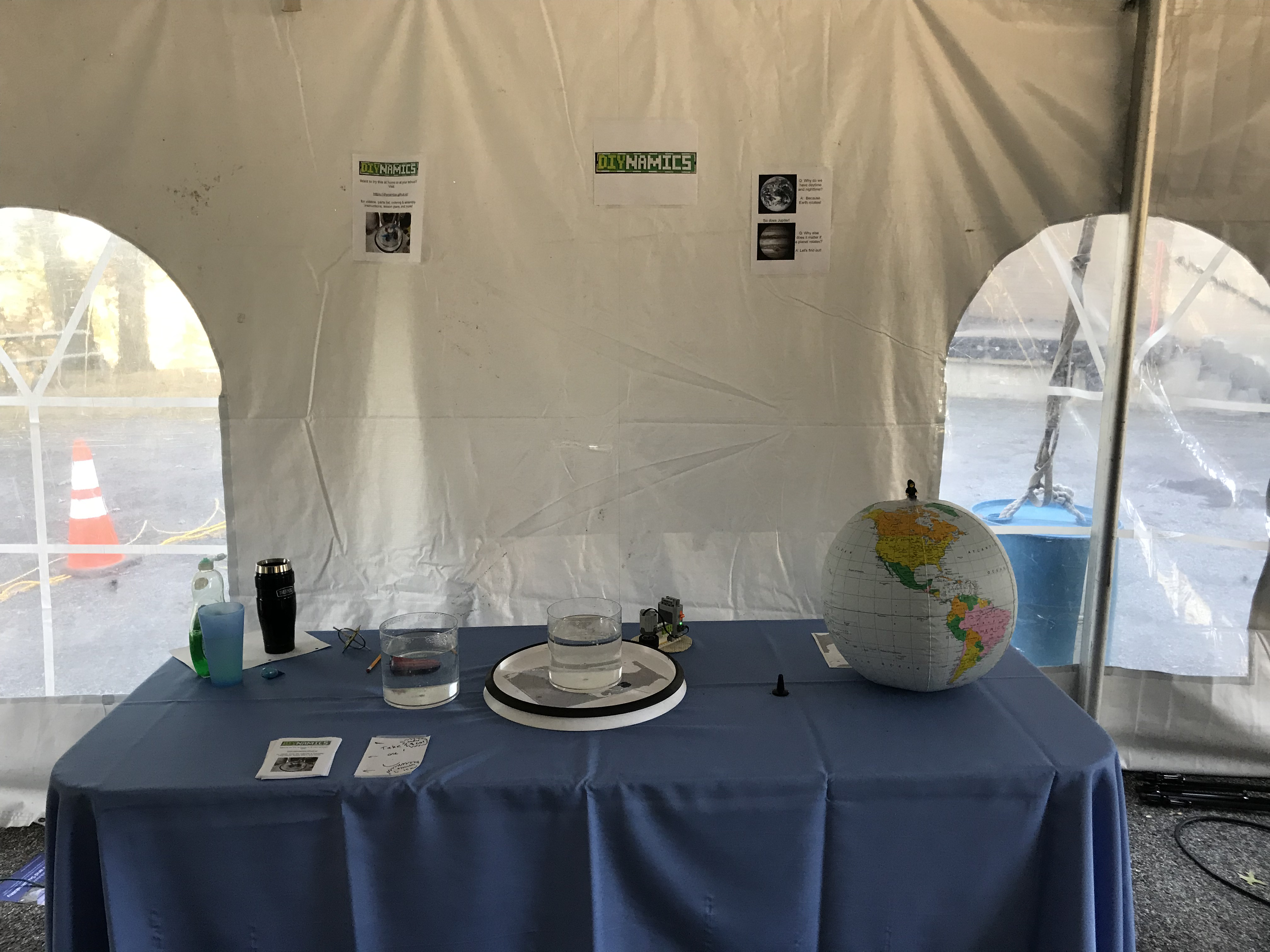 The DIYnamics table before the event kicked in to high gear. Just out of the frame to the right was the Weather in a Tank booth led by Jeff Strong. With only Spencer at the DIYnamics booth, and only Jeff at the Weather in a Tank booth, we didn’t manage to get a picture of the DIYnamics booth in action! Which is a good reminder: running a table with one person is possible, but especially for longer events it’s much better to have multiple volunteers.

Jeff made excellent use of technology in his demonstrations. The Weather in a Tank platform includes a camera mounted in the rotating frame, which he fed to a projector that beamed the footage onto a screen behind him. Meanwhile, Jeff showed animations on an iPad of real-life weather over the north pole, showing attendees just how similar the real-world patterns look like our simple rotating tank setup. 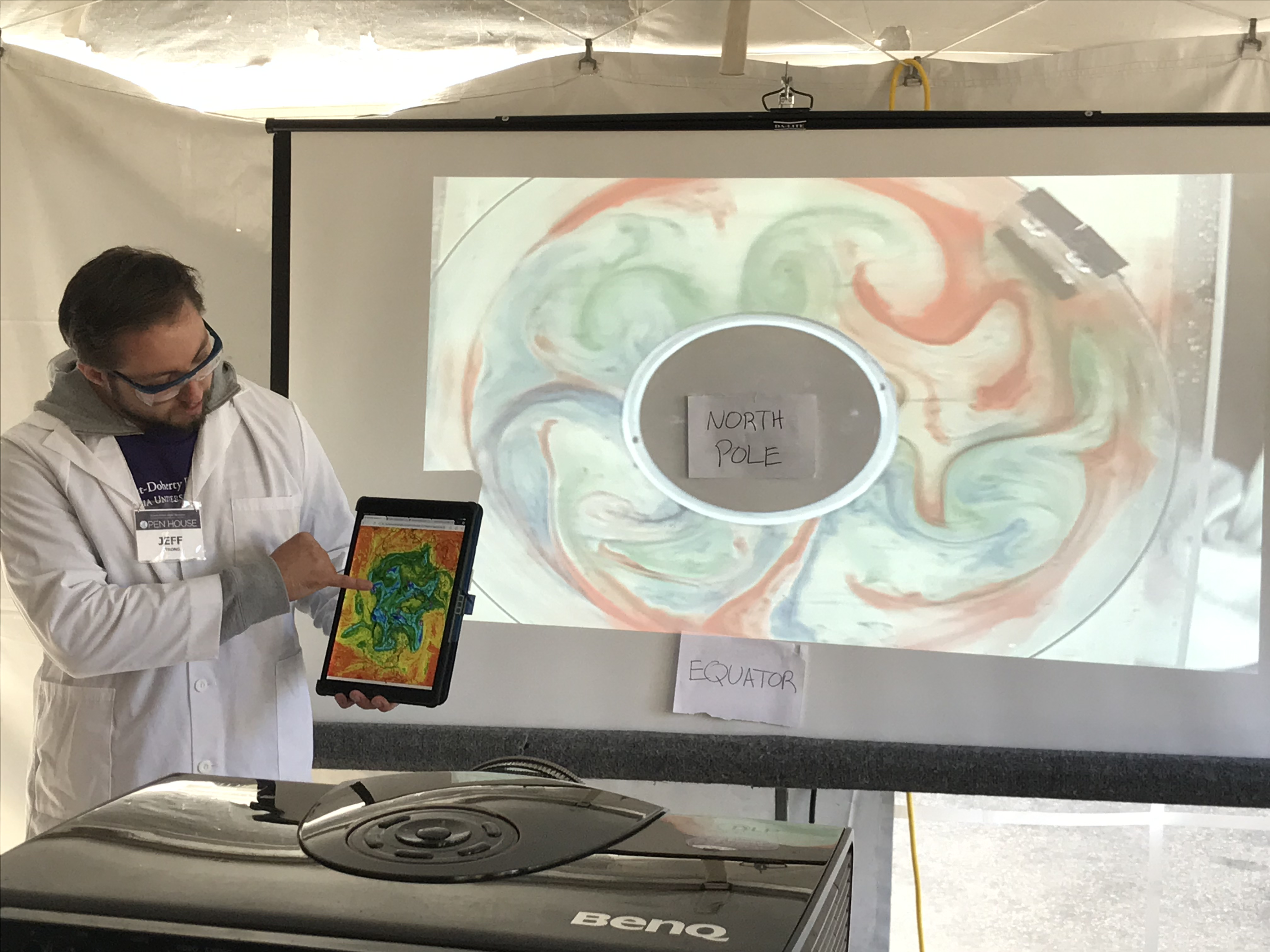 Jeff using technology to help make the connection between the behavior in the tanks and the real world. The Weather in a Tank setup includes a mounted camera in the rotating frame, which was connected to a project and shown on the screen here, with the effective “North Pole” labeled. Meanwhile, Jeff used an iPad to show animations of real-life weather patterns over the real-life North Pole. Even from just this stillshot image you can see how similar the two look!

One lesson we learned from this event was that, although having one person per table can work, it’s much better to have two or more. With only Spencer at the DIYnamics table, there was a lot of down time in between demos while Spencer emptied out the tanks, refilled them, got them spinning again, etc., not to mention during a break for lunch. And likewise for Jeff at the Weather in a Tank exhibit. If we had an extra hand or two at each table, we could have had demos running more or less nonstop throughout the day.

This was a great event, and we thank all of the attendees for their enthusiasm as well as everyone at Lamont and Columbia more broadly who helped make it happen. We’re already looking forward to Open House 2020!